A nightmare came to Arsenal after the defeat at Crystal Palace

Difficulties surrounded coach Mikel Arteta’s teachers and students right in the fiercest phase of the season.

The London Gunners are highly appreciated for their position in the top 4 after very impressive performances. However, in the 31st round of the Premier League last weekend, when marching to Crystal Palace with the task of winning to reclaim 4th place from Tottenham, coach Mikel Arteta’s teachers and students suffered a 0-3 defeat.

Temporarily setting aside the technical factors in the last match, the most worrying issue at the moment is the injury situation of the pillars. Arsenal have been without Kieran Tierney because of a knee problem and risk the Scotland international being sidelined for the rest of the season.

Nuno Tavares had a disastrous performance.

Coach Mikel Arteta has arranged Nuno Tavares to replace Tierney on the left corridor. The performance of the 21-year-old star against Palace can only be summed up in two words “disaster”. The Portuguese defender made a direct mistake that led to the first 2 goals because of his poor ability to follow. After the end of the first half, Arteta was forced to withdraw Tavares from the field.

Tierney’s injury and Tavares’ poor form are huge problems for the Gunners for the remaining nine games of the season. Granite Xhaka will most likely be pulled to temporarily fill this position. Remember Xhaka also ended the 2020/21 campaign as a left-back, leaving Arsenal to pay dearly in key moments. This is completely repeatable this season.

Not stopping there, Thomas Partey also left the field early in the last match due to injury. The Ghanaian midfielder signaled he needed to be substituted, but Palace put the ball in play, allowing Wilfried Zaha to break through, earn the penalty, and make it. Partey could only watch his opponent move around with limp steps. 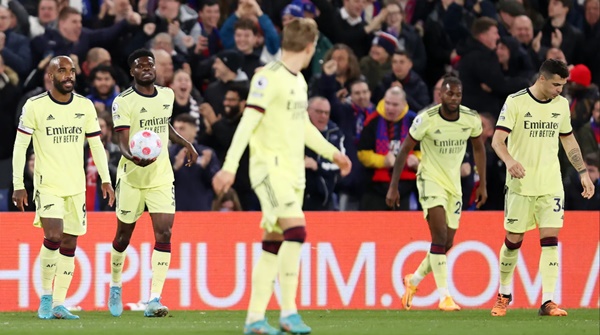 A nightmare for Arsenal.

Partey and Xhaka’s form in midfield has played a big part in Arsenal’s recent sublime form. If one is sidelined due to injury, the other has to drop back to fill the left-back position, it will be a real nightmare for the London Gunners for the rest of the season.

Tottenham are having a great time under Antonio Conte, while Arsenal’s defeat has revived hope for Man Utd, and to some extent West Ham. How will Arteta solve the immediate problems?

Rangers and Celtic stars in greatest...

Giorgos Giakoumakis out of Celtic...